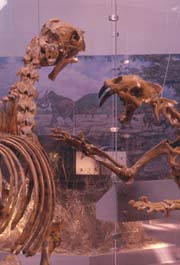 Ralph B. Clark Regional Park has a rich history of fossils. Over 10,000 years ago this site contained marshes, grassy meadows and oak woodlands, inhabited by at least 70 forms of life including the ancient mammoth, ground sloth and ring-tailed cat. Paleontologists have discovered remains of prehistoric camel, whale, bison and the largest collection of fossilized pond turtles in Southern California.

The rich fossil beds were revealed when the California Division of Highways excavated sand and gravel from the site for use in construction of the Santa Ana and Riverside Freeways from 1956 to 1973. At the time the park site was known as the Emery Borrow Pit.

The significance of the site led to public demand that it be preserved. As a result, the County of Orange acquired the property in 1974.

Today, unique Ralph B. Clark Regional Park not only preserves the fossil beds, but also provides a variety of recreational and educational opportunities for everyone.