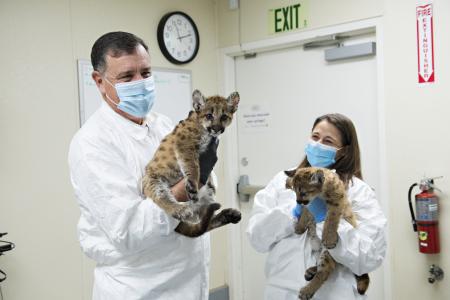 California Department of Fish and Wildlife (CDFW) brought the two female kittens to a local veterinary hospital in Orange County for treatment when they appeared to languish without any sign of their mother. Following further assessment and treatment the two kittens were transported to the OC Zoo in Orange, Calif. where they will later be housed in a new habitat.

“OC Parks and I are thrilled to welcome these newest residents of our zoo,” said Supervisor Wagner after meeting the two cats. “They’re a great present to the people of Orange County this holiday season.” Wagner continued, “Once they’re a bit more comfortable in their new home, and our large mammal enclosure is ready for them early next year, we’ll introduce Orange County’s newest stars to what I am sure will be their adoring public.”

An employee at a Thousand Oaks office building that abuts open space reported Nov. 29 seeing four small mountain lion kittens under a picnic table near their building. According to the National Park Service (NPS), the animals appeared to be about six weeks old and were alone and thin, but in stable condition.

NPS biologists captured and examined the kittens, fitting them with tiny tracking collars, and monitored them with trail cameras to see if their mother returned. After a few days, with no sign of the mother, they noticed one of the kittens was in particularly poor health. CDFW rescued the kittens that day, Dec. 1, and took them to a local veterinarian.

Two of the kittens died overnight. CDFW took the two surviving kittens to the veterinary hospital in Orange County the next day. Subsequently, the two kittens were transported to the OC Zoo for further care.

According to the NPS, their mother was likely killed or abandoned the kittens. Due to their very young age, they cannot be released back into the wild.

The OC Zoo will continue to care for the kittens. The animals are not yet available for the public to view.

The zoo will house them in its upcoming large mammal habitat. The habitat is currently under construction and scheduled to open early next year.

The OC Zoo, inside Irvine Regional Park, focuses on animals native to the southwestern U.S., including black bear, mountain lion, eagle, beaver, porcupine, bobcat and more. Many are injured, orphaned, confiscated or not releasable into the wild.

An NPS press release regarding the monitoring and rescue of the kittens can be found here: https://www.nps.gov/samo/learn/news/four-mountain-lion-kittens-found-outside-a-thousand-oaks-office-complex.htm

OC Parks manages nearly 60,000 acres of parks, historical and coastal facilities and open space for the County of Orange as part of OC Community Resources. http://www.ocparks.com