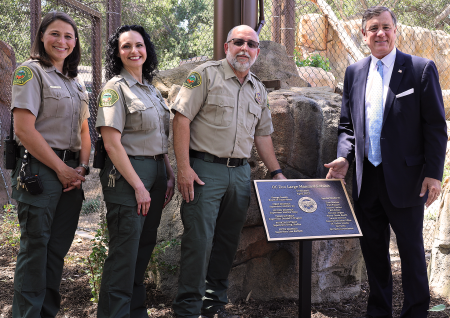 (Orange, Calif.) – A new large mammal exhibit at the OC Zoo in Irvine Regional Park will open to the public May 13 and will mark the debut of four new animals.

The new, 2-acre habitat represents the largest expansion project in the zoo’s history. It will house an adult mountain lion, three orphaned mountain lion cubs and an adult jaguar.

“The OC Zoo has enriched our community for many years,” said Donald P. Wagner, Orange County Supervisor of the Third District. “At only $2 admission per person, visitors can view outdoor habitats and learn about local wildlife from past to present. The current expansion features new rescue animals, something people of all ages can enjoy —I look forward to visiting the exhibit with my family this spring."

The expansion, part of the Zoo’s 2013 General Development Plan, is designed to give patrons an up-close look at the animals living inside, while creating a comfortable and natural-looking environment for the large cats. The area includes artificial rock walls, climbing platforms, a waterfall and a bridge for the cats to cross overhead.

Animals that will call the new habitat home include an adult mountain lion that came to the zoo as a young orphan in 2011. Three new mountain lion cubs are also in the flexible space, which can be configured into four separate or connected areas.

Two of the cubs, a pair of sisters, were found as very young kittens, apparently abandoned or orphaned near a Thousand Oaks, Calif. office park in November of 2021. Another cub, a male approximately 8 months old now, was found after being hit by a car near Monterey, Calif., also in November of 2021.

The zoo treated the male cub’s serious injuries and the female cubs’ malnutrition. Mountain lions typically stay with their mothers and learn to hunt for approximately one to two years. Due to their extremely young ages, the three cubs would likely not survive in the wild and will remain at the OC Zoo.

A new black jaguar, approximately two years old, is also making its debut in the habitat. Considered endangered by U.S. Fish and Wildlife Service, jaguars’ range includes the southwest of Arizona and New Mexico, south to Argentina and northeastern Brazil. The jaguar comes to the OC Zoo from the World Wildlife Zoo in Arizona.

The OC Zoo will celebrate the new habitat and welcome its new residents on May 13 from 10 a.m. - 3:30 p.m. and May 14 from 10 a.m. - 4:30 p.m. Throughout the opening weekend, special entertainment, activities and animal ambassadors will be available at the zoo. The zoo will also be taking name suggestions in person for the sibling pair of female mountain lion cubs who arrived to the OC Zoo without names. Animal keepers will narrow the suggestions and the public can vote on their favorites in the weeks to come. Details will be posted on OCParks.com and OC Parks social media channels.

The OC Zoo traces its roots back to 1905 when red foxes were introduced in Irvine Regional Park, and a small collection of animals was added in 1920. The current, modern zoo officially opened in 1985. In late 2019, the zoo debuted a new entry plaza and restroom building, the first improvement outlined in the General Development Plan.

Read this release in:

OC Parks manages nearly 60,000 acres of parks, historical and coastal facilities and open space for the County of Orange as part of OC Community Resources. http://www.ocparks.com