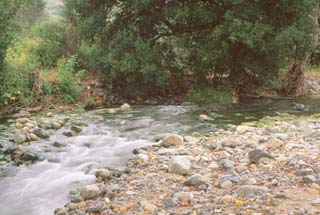 On July 23, 1769, Gaspar de Portola led an expedition into what is now Orange County and camped a few miles east of the San Juan Capistrano area. On July 24, the expedition headed inland to avoid the many streams and swamps in the area. They found a large plateau area and camped that night on its western edge by a canyon which the Franciscans named San Francisco Solano. This was on the eastern side of Trabuco Creek about three miles downstream from the present Trabuco Oaks. While camped here on July 24-25, one of the soldiers lost his "trabuco" or musket, a most valuable possession to any soldier. To mark this loss, the stream was named Trabuco. The name has been associated with the mesa, the canyon and the entire area ever since.

O'Neill Park is part of the old Rancho Trabuco. The first two square leagues were granted to Santiago Arguello in 1841 by Mexican Governor Alvarado. Arguello sold these lands to Juan Forester in 1843. Forester received an additional grant of three square leagues in 1846.

Forester sold the Rancho to F. L. S. Pioche before 1880. Various pioneers held title, but the ranch eventually became the property of James L. Flood and Jerome O'Neill. The two were owners of one of Forester's other ranchos, Santa Margarita y las Flores. Thus, it became part of the great O'Neill Ranch.

In 1948, the O'Neills donated 278 acres of canyon bottom land to the County of Orange for park purposes. The O'Neill family donated an additional 120 acres in 1963. In March of 1974, the county purchased 232 acres of land along the park's northern boundary. This acquisition prompted the purchase in 1975 of 30 acres along Live Oak Canyon Road for access onto the new property. On October 5, 1982, 935 acres, known as the Arroyo Trabuco, were dedicated to the County by the Rancho Mission Viejo Company. The Arroyo Trabuco area is now open to public use.