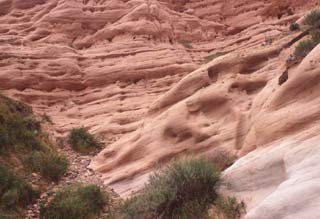 The property now known as Whiting Ranch Wilderness Park has been associated with several pioneer Orange County families. In 1842, Jose Serrano was granted 10,668 acres of land known as Rancho Canada de Los Alisos. Serrano and his sons raised crops to sell such as corn, beans and watermelons. However, their principal industry was cattle, from which hides and tallow were sold. Unfortunately, the drought of 1863 and 1864 caused the death of Serrano's herds, forcing foreclosure of the ranch to Los Angeles banker J.S. Slauson and Associates. Slauson divided the ranch into ten parcels, the largest being 10,000 acres. The property was then sold to Dwight Whiting in 1885. Whiting encouraged the development of El Toro by subdividing level land, bringing the railroad through, and by planting olive trees, grape vineyards and some 400 acres of eucalyptus trees. This area is now known as Lake Forest. However, due to the arid climate and poor soil, agricultural use was unsuccessful. In 1959, the Whiting properties were sold to V.P. Baker and Associates, and residential development has since ensued.

Acquisitions have enlarged the park to approximately 2,500 acres. An additional 87-acre parcel adjacent to El Toro Road just south of Cook's Corner, known as the McFadden Ranch House, includes the ranger station. The house was built in 1915 by James McFadden to provide housing for the ranch foreman and his family, allowing them to use the ranch more fully for farming and livestock pasture.