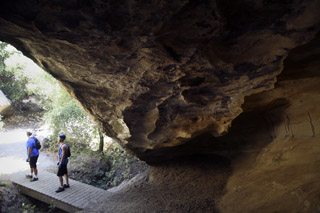 Aliso and Wood Canyons Wilderness Park makes a great outdoor classroom for students of all ages, featuring many interesting geological formations and archaeological and paleontological sites. Perhaps the best example of marine fossils in south Orange County lies within the northeastern section of the park. Scientific studies are often conducted within the park by many colleges and universities taking advantage of the park’s diverse resources.

The park’s natural features are rich in human history. Aliso Creek formed the boundary line between two modern day Native American tribes, the Acajchemem (Juaneno Mission) and the Tongva (Gabrieleno Mission). Some of the park trails are given native Juaneno names such as Aswut (golden eagle), Toovet (brush rabbit), Alwut (crow) and Hunwut (black bear). The Acajchemem people were hunter-gatherers and made up many small family groups related by marriage and language. Their annual migration from the coast in winter to the Santa Ana Mountains in summer kept them close to plentiful food sources and fresh water.

Another historic landmark is Dripping Cave. It is also known as “Robbers” cave and is the park’s largest rock-shelter. It was once used as a temporary refuge by Native American hunter-gatherers, and later the shelter was reportedly used by the infamous Juan Flores “gang” as a hide-out from which to rob the San Diego and Los Angeles stagecoach. Nowadays the shelter gets its name from rainwater dripping from the upper lip of the sandstone rock.

First viewed by Europeans of the Portola expedition, this land was incorporated into the 1842 Rancho Niguel Mexican land grant and served as a sheep and cattle ranch. Ownership of the ranch changed several times during the early 1900s. Portions of the ranch were sold in the 1960s and are now part of Leisure World, Laguna Hills, Laguna Niguel and Aliso Viejo communities. Various land purchases and other major dedications contributed to an additional 1,800 acres that make up the park’s current expansive area.

Aliso and Wood Canyons Wilderness Park is part of the 19,000-acre Laguna Coast Greenbelt and the 38,000-acre National Nature Preserve of Orange County.