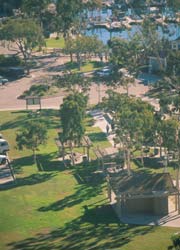 The construction of Dana Point Harbor started in the late 1960's with the building of the rock breakwater jetties. The water inside the jetties was then pumped out after all the shellfish and sea life had been transplanted. The marina was then built and the water was allowed to reenter when the temporary jetty across the entrances to the East and West Basin was removed. Dana Point Harbor was officially dedicated on July 31, 1971. While the harbor was very advanced in design and facilities, it has retained the secluded beauty and historic charm of its romantic past.

Dana Point Marina is divided into two basins, the East Basin and West Basin. Each basin operates as a separate marina, holding a total of 2,500 slips for vessels of various sizes. Also, included in the harbor are fifty quest slips for boats transiting the coastline and yacht clubs making weekend cruises to the ever popular harbor. There is also a ten lane launch ramp, dry boat storage hoist, fishing pier, shipyard, marine fuel dock, three yacht clubs and a commercial sports fishing operation which also offers whale watching trips during the migration season. Numerous restaurants and stores cater to the many people who shop in the marina and enjoy a good meal in a beautiful setting in either Mariner's Village or the Dana Wharf areas. A large hotel in the marina, The Marina Inn, offers overnight lodging for people wishing to stay in the harbor. There is a small swim beach in the west end of the harbor and numerous picnic tables and shade structures spread throughout the harbor for the public's enjoyment.

The Orange County Marine Institute, located at the far west end of Dana Point Harbor, is a unique educational experience for both children and adults. The facility provides classroom instruction, wet laboratory equipment, display tanks, and exhibits to study marine life. A 70 foot research vessel "Sea Explorer" provides daily cruises to study and observe marine life offshore. Just beyond the base of the breakwater lies the Marine Life Refuge, a protected area for observing marine life in the tidepools at the base of the majestic bluffs overlooking the ocean.

The Marine Institute also displays the brig "Pilgrim" which is a full-sized replica of the square rigged vessel on which Richard Henry Dana sailed into this cove. The Pilgrim is docked adjacent to the fishing pier and offers school children the experience of life aboard a sailing ship in the 19th century.

Dana Point Harbor offers the recreational boaters and county residents alike, numerous events which attract thousands of spectators and participants each year. Starting with the February "Festival of the Whales" and its many activities for a three week period. Other events during the year include: the Classic Wooden Boat Festival, offshore powerboat races in June, spectacular July 4th fireworks show, "Tallship Festival" in September, and the Thanksgiving Day "Turkey Trot" Race. The annual "Christmas Boat Parade" concludes the year's events.

Dana Point Harbor is a County Park located within the City of Dana Point. Landside law enforcement is provided by the Sheriff's deputies assigned to the City, and the Harbor Patrol operation provides all types of routine and emergency marine search and rescue operations on the water both inside and outside the harbor. They respond to calls for assistance from the County line at Cottons Point, south of San Clemente, to the coastal area off the City of Laguna Beach. Offshore jurisdiction extends out three miles, however, in a matter of life or death they will respond to any point where they have enough fuel to return to the harbor with the victims.