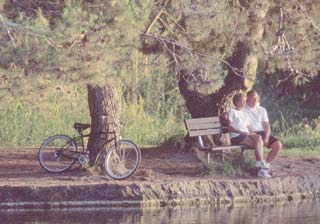 The lands which comprise Yorba Regional Park were once part of an expansive cattle ranch belonging to Bernardo Yorba. This Mexican period land grant totaled 13,328.5 acres on the north side of the Santa Ana River and was called Rancho Canon de Santa Ana (Canyon of St. Anne).

Bernardo continued the tradition of cattle ranching begun years earlier by his father, Jose Antonio Yorba, a Spanish soldier with the Portola Expedition of 1769. Jose Antonio had received a grant of over 62,000 acres of land on the south side of the river as early as 1810. This was called Rancho Santiago de Santa Ana.

The center of life on Bernardo's rancho was a two-story adobe called San Antonio. Unfortunately, it was demolished around 1926. In addition to cattle, other animals were raised, namely sheep, mules, burros, oxen and horses. Crops such as corn, beans, wheat, pumpkin, and even watermelons were grown. Grapes were planted for wine and many orchards graced the property producing various fruits, walnuts, figs, and olives.

The tradition of agriculture remained in the area of Yorba Park long after the settlement of Yorba disappeared. Various field crops have been cultivated since then, and the site of the park also served as a hog farm.

In the early 1970's, the Yorba Park Site was added to the County's Master Plan of Regional Parks as a first priority project. The Board of Supervisors ordered implementation, and on June 20, 1972, the 166-acre site was purchased at a total cost of $3.6 million.

Under a grant from the U. S. Department of the Interior, Bureau of Outdoor Recreation, Orange County was reimbursed $1.3 million for the acquisition of land for the Yorba Park project. A formal announcement of this grant was made in January of 1972 by the wife of then Secretary of the Interior, Roger C. B. Morton. Mrs. Morton visited both the Yorba Park site and the newly completed Featherly Regional Park.

Park design was initiated and the concept of a water oriented park evolved as a recreation of the Santa Ana River environment. The park opened to public use as the United States bicentennial year drew to a close, December 16, 1976.

Today, with the completion of its three phases of development, the park is completely operational. The visiting public will be able to enjoy the aesthetically pleasing canyon facility for generations to come. It will provide them with an easily accessible recreational premise for their enjoyment.