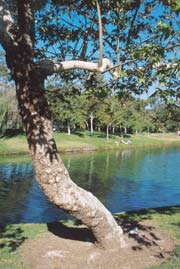 The land comprising Mason Park was originally part of Rancho San Joaquin. This rancho was granted to Jose Sepulveda in 1842 by the Mexican governor Alvarado. In 1864 the Rancho, consisting of 48,803 acres, was acquired by the firm of Irvine, Flint, Bixby and Company. The firm acquired another 59,381 acres with the purchase of Rancho Lomas de Santiago and a portion of the adjoining Rancho de Santa Ana. In 1876, James Irvine, Sr., bought out his partners to become sole owner of the vast rancho of over 100,000 acres.

The park, originally named University Park reflecting nearby U.C. Irvine, was renamed after William R. Mason, who served as President of the Irvine Company from 1966 until his untimely death in 1973. The Board of Supervisors changed the name of the park from University Regional Park to William R. Mason Regional Park in recognition of the impact his direction had and will continue to have on Orange County, not the least of which was the donation by the Irvine Company of land for this park. The first phase of the park, forty-five acres, opened to public use in 1973. A 50-acre second phase was completed in 1978. The second phase of development included a 9.2 acre lake which has proven to be a very popular attraction for park visitors.