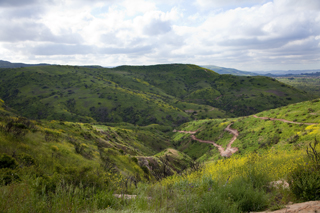 The park site along Santiago Creek which is the main tributary of the Santa Ana River in Orange County. The creek was named by the expedition of Gaspar de Portola in 1769 in honor of St. James (San Iago).

Santiago Creek has long been of economic value to the county. In earlier days it provided much needed irrigation to this growing agricultural county. In recent times it has been an important source of sand and gravel, the second most valuable mineral resource in Orange County.

In 1866 Llewellyn Bixby and his cousins, Benjamin and Thomas Flint, and a fourth partner, James Irvine, purchased portions of Rancho Santiago de Santa Ana. In 1876, the Bixbys and Flints sold the majority of their holdings to Irvine. The "Blome" area, which the Bixbys called "The Oaks," remained in Bixby hands and later became part of the Bixby Land Company. In August, 1879, local landowners sought to improve the agricultural productivity of their lands. On Bixby's land a clay dam was submerged to the bedrock floor of Santiago Creek to force more groundwater to the surface. When that early dam was destroyed by flooding a few years later, it was replaced in 1892 with one made of river rock and cement which still stands within the present park. This area later came under the ownership of the Carpenter and Serrano Irrigation Districts.

In 1938, 33 acres of land on the south side of Santiago Creek (just down stream of the Old Dam) were purchased by W. Norment Windes from the dwindling Bixby Land Company holdings. Windes was the chief financial officer for the land company. He built a large residence (later to become the park's Nature Center) and various out-buildings. A nine-acre Valencia orange grove had been planted by 1937.

Norment Windes and his wife lived on the property until his death. His widow sold it to his brother-in-law, Harold Blome, in 1955. Blome was a professor of education at Redlands and Pasadena as well as a one-time Arizona rancher and copper miner. The Blomes occupied the property until 1975.

Directly across the creek from the Blome property was the 62-acre parcel purchased in the 1920's by George Lemke from the Bixby Land Company. He named the area "Oak Tree Ranch" and in the late 1920's planted 26 acres of Valencia oranges.

In 1959, Lemke sold the property to the Rinker family, who discontinued the citrus operation. The Rinkers hoped to build a residence on the property and planted approximately 3000 trees among the declining orange trees. However, the Paseo Grande Fire of 1967 and the heavy flooding of 1969-70 both severely impaired the physical and commercial value of the area. Rinker soon abandoned his operations and his plans.

Recognizing the recreational potential of the properties, the Orange County Board of Supervisors moved to acquire them for public use and preservation. The Rinker property was purchased in 1974 for $560,000 and the Blome property in 1976 for $379,000. Limited public use began early in 1977.

In 1981 the ranch house built by Windes in 1938 was re-opened as the park's Nature Center. It now provides exhibits on the natural and human history of the area with a special attention given to the wildlife. Park staff place particular emphasis on environmental education, sharing the beauty and wonder of nature. Nature walks, slide programs, and films are presented to school and youth groups as well as the general public.

In 1984, the Board of Supervisors authorized a $1 million construction project for the park. Key features of the development included the expansion of the Nature Center, construction of a parking lot and maintenance facility, and the replacement of a restroom lost in the 1982 Gypsum Canyon Fire.

In 1988, the Anna Smith home, a private residence on 1/3-acre of land within the park's boundaries, was purchased by the County and added to the park for use as the operations office. The following year, in an agreement with The Presley Companies, an additional 148 of adjoining land to the north was added to Santiago Oaks, bringing its total contiguous acreage to approximately 275. An additional 81 acres of open space and riding trails in the hills directly northwest of Chapman Ave. and Crawford Canyon Road complete the park.

In 2003, the County of Orange and the Barham Ranch Committee celebrated the acquisition of a 526 acre portion of land. The addition of Barham Ranch connected 3,550 acres of contiguous open space which preserves and protects environmentally significant coastal sage scrub, grasslands, willow woodland, oak woodland habitats and the wildlife they support.

In 2008, the 210 acre Weir Canyon Wilderness Park was incorporated into Santiago Oaks. The annexation created a trail system that spans from Irvine Regional Park through Santiago Oaks to Weir Canyon in East Anaheim Hills.

Throughout the years additional smaller parcels were added, bringing the total acreage of the park to approximately 1,269 acres.