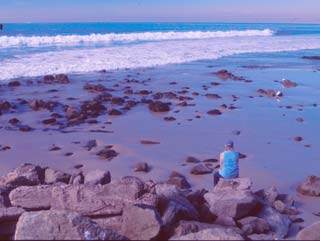 Spurred by a 1965 Grand Jury Report which stressed the "overcrowding of our parks, beaches and harbors," the County of Orange has continuously sought to acquire more public/recreational areas. The Niguel Beach region, previously known as Salt Creek, has always been a popular surfing and swimming location. However, the land on the island side of Salt Creek was purchased by the Laguna Niguel Corporation, then later AVCO Community Developers. Final acquisition of beach front property was completed in 1968. This land was set aside for private community development, including single family dwellings, condominiums, and apartment complexes.

In the late 1960's, public pressure swelled to obtain the beach for public use. The "Save Salt Creek" movement, well-organized and vocal, drove hard for public access and use of the beach.

The Orange County Board of Supervisors ordered acquisition negotiations, and on February 2, 1971, the Board of Supervisors accepted in principle an offer by AVCO to provide the county certain acreage for beach parking and the beach itself. An agreement was signed for a $2.6 million turnkey operation - land purchase and construction of beach park improvements.

However, the controversial project was to be plagued by delays that didn't see construction completed until 1976. A partially completed facility was opened in July, 1972. Today, a completed beach park, with almost a mile of public beach, serves hundreds of thousands of beach goers annually.